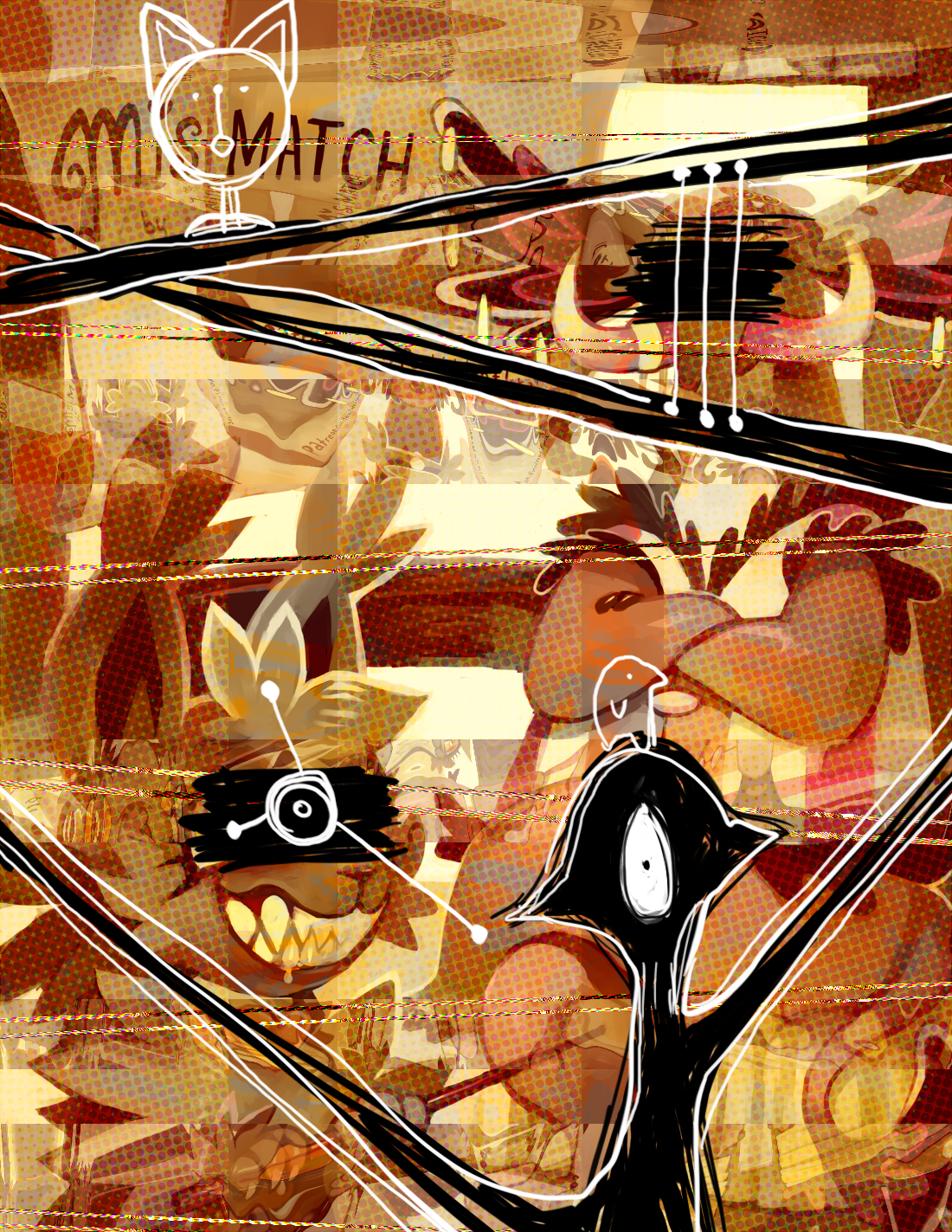 After making a post yesterday trying to explain the novice/inexperienced writing that went into Mismatch and the resulting confusion over consent in the comic -the way I had intended for it to read vs the way it ended up reading to some people - I decided to just remove the comic. I wasn't (and I'm still not) interested in debating with anyone about what the content is or isn't - I just wanted to provide an explanation for why it was the way it was. Here was the original text I had up on the followup:

I got a DM earlier asking me to clarify some things about the comic that the person wasn't sure they understood, and as it turns out, it was confusion over the issue of consent in this comic - if it was present, how it was present, etc.

So! I figured it was time to write something, since this comic is kind of old now (like 3 years or something? 3 1/2?) and its writing has become a little outdated, too.

One of the big issues for me was that this was one of my first serious colored adult comic endeavors. My previous one isn't found on this site (as I made it for another paysite) and it also features Alice in a similar "implied consent" situation, the kind that was maybe a little too ambitious to successfully pull off as a novice porn writer at the time. The tricky thing about trying to write "implied consent" is that if you don't frame it correctly, it comes across as non-con material, which... isn't what I was going for. But with the writing in Mismatch as it stands, it doesn't really stop people from reading into it that way, which is unfortunate!

I tried to make it clear that Quillion had an "out" -- Alice telling him he could move his trunk around to stop the situation -- and that was the equivalent of a safe word. Everything Alice did was supposed to be implied as something he wrote down would be OK with him on the matchmaking form, but after hearing it from enough people, I just don't think I wrote it strong enough in parts. I know a lot of people DID get it, which is reassuring, but it sucks that I wasn't able to write it correctly so that everyone would be able to understand what I was trying to convey.

This got doubly muddled by Quillion choosing not to engage with her further - without showing any of his thoughts, it made it hard to tell what was him genuinely feeling bad, and what was him being embarrassed that he liked it a lot! (If this had been an actual non-consenting situation, I would have not at all written it so frivolously, and I would have made it clear that I was writing non-con so that people would have a content warning.)

There was supposed to be a sequel, written by my friend (who is the owner of the character Quillion!), in which they meet up again and there's more talk about the situation and what's OK to do, but it never got finished - I'd thought it would for a while, which would've eliminated the uncertainty that this comic left hanging in the air, but it didn't happen, and I neglected to write anything else up about it until being asked about it earlier today.

Anyway, I really hope that if you felt troubled over the comic, you can find relief in learning that I just wasn't skilled enough to pull off the situation at the time I was writing it, and that it wasn't ever supposed to be construed as rape or non-con. I could have done a lot more to give you insight into Quillion's mindset, or how he felt, or what he agreed to, but I just didn't think to do that - because I didn't realize it would be read differently than I'd intended. That was my failing as a writer at play. I'd like to hope I've improved at writing situations that are easier to read as consensual, even if there's situational complexity involved.

Please understand that I'm always trying to figure out better ways to write what I've got in my head, and that it doesn't always translate quite how I intended! But that I'm definitely trying as hard as I can. Thank you guys for sticking with me through all these comics, even if they're rough in spots! Hopefully I can keep getting better and better with more practice.

Anyway, I'd only posted the paragraphs above to give people some insight into roughly what I was thinking at the time. If I were to redo the story, there'd be a million things I'd do differently to get my idea across - but I'm just not interested in it, because I've got a lot of other characters I care about. Sorry. I'm just not interested in people trying to explain to me whether or not my fictional characters (that I wrote) consented. How it's read per person is one thing, and it's totally fine to feel "it didn't read that way to me" - I understand that, which is why I made the original post! But to argue with me that I'm wrong about how the characters felt is another, and is unwelcome - you're essentially arguing with "past me", who doesn't exist anymore! And it's just not useful. It was a clumsy writing attempt and I've no desire to keep it up, because I hate trying to explain it to people who don't want to understand where I was coming from.

Whether or not you agree with the thoughts I had at the time is irrelevant, because it's not something I would create today at all; it's just kind of stressful and distracting to me. I don't say this to be scornful of anyone, or to disregard anyone's feelings - it's just... not relevant to how I feel, or to me, since it's just not the kind of work I'd be interested in making now... so the conversation is moot. Sorry to anyone who was upset over it. I wish I'd done better so that wouldn't have happened.

Because of that, it took me a while to find my own voice regarding things I cared about, and how to write them properly. It took a while to figure out how to do actual solid character development within the framing of an adult work! And this comic was just part of that. Oh well. Mistakes to be learned from, I guess. I'm hoping the work I make now has my intentions shine through a little clearer? My current work is the kind of work I'm genuinely happy to make, and still genuinely enjoy - but it took fumbling through writing that didn't pan out in order to get to this point, unfortunately.

I'm very glad for everyone who stuck around despite the awkward first Forflor comic, regardless. It just happened to be a stepping stone on the path towards comics that expressed my ideas more correctly. Apologies to anyone who liked it, though - it brought me too much anxiety and stress to keep it up, and I don't have time to argue with people over it :( I have too many other things to do to be stressed out about a comic I don't even like anymore. Thank you all for the support and understanding, though. It sincerely means a lot to me. I'm always trying to do better in my works, for whatever that means.